ANALYSIS AND COMMENTARY OF THE “TAX CUTS AND JOBS ACT” – 2017

On December 18, 2017, the House and Senate Republicans released their new tax package.  President Donald Trump signed it into law on December 22, 2017.  Contrary to main-stream media reporting, the package contains tax breaks for everyone.  The primary intent of these tax cuts is to stimulate the economy with the anticipation that the tax savings for both businesses and individuals will promote additional spending and, thus, generate positive economic results.  This theory is not new.  In 1981 when President Reagan became president, the highest marginal individual tax rate was 70%, there was runaway inflation, and the economy was worse than stagnant.  At that time, the Republican majority government passed tax laws reducing individual tax rates so that the top marginal tax rate was 50% as well as allowing expensing of certain large equipment purchases thereby reducing taxable income for businesses.  The spending of durable and non-durable items increased due to the lower taxes allowing higher take-home pay for workers.  Further, businesses began purchasing newer, more efficient equipment to replace out-dated or dilapidated older equipment.  This required manufacturers to begin higher rates of production to replace the inventory being purchased by consumers and, additionally, new jobs were created.  The economy soon began soaring, thus putting the original tax-cut theory into action.  The same thought process is the basis for the new tax laws.  Time will tell, but we think the same results will occur as did in the 80’s.

For tax years beginning after December 31, 2017, C-Corporation’s tax rates will be reduced from a high of 39% to a flat rate of 21%.  The theory behind this tax cut was two-fold: (1) lowering corporate tax brackets would free up corporate cash flow and allow more hiring and higher wages as well as purchasing new equipment to replace outdated equipment and (2) to bring the U.S. corporations into a more level tax field with foreign competitors, the idea being that U.S. corporations would now have disincentives to use foreign countries as “tax havens” for both employment and capital exportation.

Like-kind exchanges will only be available for real property transactions completed after December 31, 2017 or the property disposed of by the taxpayer in the exchange is disposed of on or before December 31, 2017.  Prior law allowed for personal property used in a trade or business or for investment purposes to trade with another unrelated party for like-kind personal property, thus deferring any potential gain if that property were to be sold.  This new law could have a profound impact on business owners who trade in business-related vehicles for other vehicles through automobile dealerships because those trades may become taxable events (gain or loss).

Transportation costs for employees that constitute (1) transportation in a commuter highway vehicle, (2) transit passes (ie, Sunpasses), and (3) parking costs will no longer be excludible from an employee’s gross income as a fringe benefit unless the transportation cost was directly related to business travel.  Business travel costs remain deductible as long as all the proper substantiation is maintained by the taxpayer.There is a new tax credit available for employers: Employer Credit for Paid Family and Medical Leave.  Basically, the credit is 12.5% up to 25% of the wages paid to an employee who takes a leave of absence for medical-related purposes such as, giving birth to a child and the aftercare of that child or caring for a spouse, child, or parent who has a serious health condition.  The determination of how much credit percentage is applicable depends upon the percentage of wages the employer pays the employee during their medical leave.

There must be a written policy in place in order for the credit to be available to any employer.  The plan must contain:

This deduction was written into the new tax law primarily (and maybe solely) because the top C-Corporation tax rate was reduced from 35% to 21%.  It was generally discussed that reducing only C-Corporation taxes would be unfair to all of the other small business owners who use other types of tax entities in which to run their businesses.  These entities would include sole proprietorships, partnerships, S-Corporations, and Limited Liability Companies (LLCs).

The 20% deduction of qualified business income will be reduced or phased out based upon the taxpayer reaching and exceeding a threshold amount which is set at $157,500 for single, heads of households, and married filing separately taxpayers and $315,000 for married taxpayers filing a joint tax return.

The reduction and phase out computation involves a series of “what ifs” including the business owner’s salary from the business included on Form W-2 and the acquisition of tangible personal property used in the business.  If taxpayers do not exceed the threshold amounts of $157,500 (single/married filing separately/head of household) or $315,000 (married filing jointly), then the computation of the 20% deduction is much simpler.

Net qualified business losses will be carried over to succeeding years to be combined with any other qualified trade or business income in order to computer the allowable 20% deduction for that year (IRC §199A(c)(2)).

Generally, the term “qualified business income” means the net profit from a trade or business in the U.S. for any given year less any investment income items such as interest income, dividend income, capital gain income, or any amounts received from an annuity not in connection with the trade or business.

Computation of the 20% deduction is done at the partner or shareholder level rather than at the partnership or S-Corporation level due to the wide variances of arriving at taxable income for all individuals.  The phase-out limitations noted above will be increased by the rate of inflation in years beginning after 2018.

The deduction for Domestic Production Activities is now repealed effective for taxable years beginning after December 31, 2017.

See old versus new tax brackets at the end of this document.

Under the new tax law, the 0% long-term capital gain and qualified dividend income tax bracket is based on taxable income less than or equal to:

The 15% long-term capital gain and qualified dividend income tax bracket is based on taxable income less than or equal to:

The 20% long-term capital gain and qualified dividend income tax bracket would is based on taxable income greater than:

The reason for the difference in tax theory from old tax law to new tax law is that under the new tax law, the capital gain tax bracket breakpoints uses a different inflationary index: CPI-U (Consumer Price Index for All Urban Consumers) which is less favorable versus the CPI (Consumer Price Index) computed by the Bureau of Labor Statistics.  The result is that, as taxable income increases (including the marginal tax brackets) under the CPI method, the capital gains tax brackets will not increase at the same rate under the CPI-U method.

For tax years beginning after December 31, 2017, recharacterization of ROTH IRA conversions is repealed no longer allowing the re-conversion back to a regular IRA.

Student loan interest will continue to be deductible subject to the same adjusted gross income phase out limitations.

Teachers can still deduct up to $250 in school supplies in addition to the standard deduction of itemized deductions.

The medical itemized deduction, which had been discussed as a possible repeal, was retained by this tax package.  In fact, not only was it retained, but for 2017 and 2018 the adjusted gross income phase-out limitation was reduced from 10% to 7.5% of taxpayers’ adjusted gross income giving taxpayers the potential to deduct more of their personal medical costs for 2017 and 2018.

If you itemized your tax deductions, there are additional limits on those (as well as relief from other limitations).

Miscellaneous itemized deductions will not be deductible for the years 2018 through 2025:

Under prior law, if a taxpayer’s income was too high, the total itemized deductions were limited and phased out so that at worst, the result was that only 20% of the total of these deductions actually became deductible.  Under the new law, this phase out will not apply for the years 2018 through 2025.

Beginning in 2018, Section 529 Plans for college education costs will now be able to be used for K-12 private, public, or religious schools.  Contributions to these plans remain non-deductible but the income earned is tax-free when distributions from the plan is for qualified education costs to the extent those distributions do not exceed $10,000.

Moving expenses will now be non-deductible except for any individual in the Armed Forces on active duty who is required to move pursuant to a military order and the move is a permanent change of station.  This includes employer reimbursements that were formerly non-taxable to employees as a fringe benefit; these payments will now be required to be added to the employee’s taxable salary.

The following are comparisons of individual tax brackets for 2017 with those coming in 2018: 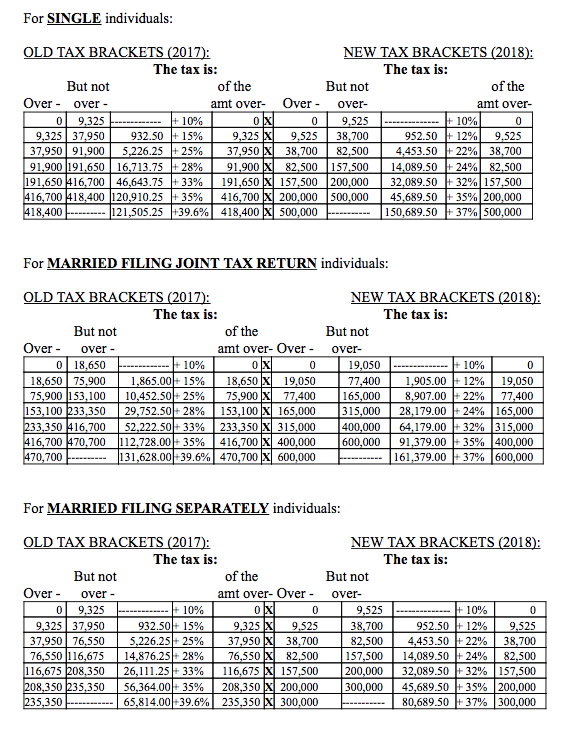 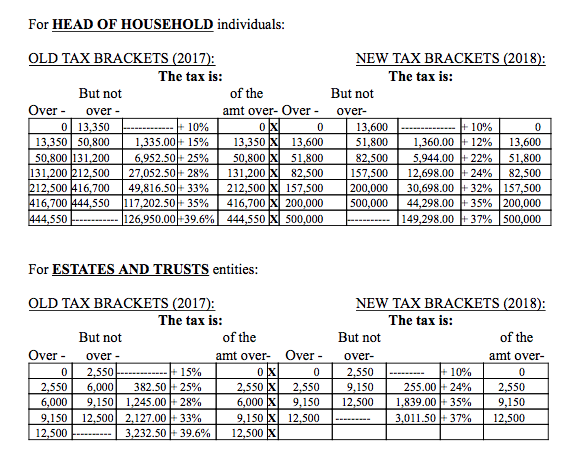 At Waler and Waler, you can rely on big firm experience with a small firm atmosphere.